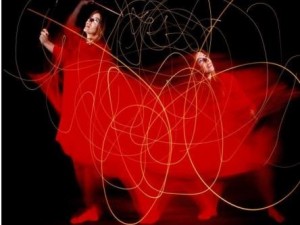 One person, two images reflects Fusional Fragments of experience as perceived and envisioned by Marc Brew.

Fusional Fragments is a fast-moving, athletic fusion of classical ballet and contemporary dance, featuring Dame Evelyn Glennie. Amardeep Sohi reviews Fusional Fragments and the performance in the second half of the program by British Paraorchestra at Queen Elizabeth Hall, on 31 August, as part of the Unlimited Festival

With a fierce spotlight thrust upon her, the mesmerising percussionist Dame Evelyn Glennie , set the rhythm which defined the show with the thundering beats of a drum. She was then joined by a male dancer, who, surrounded by three walls of light, searched and reached out of his enclosure. Combining classical ballet and contemporary dance, four other dancers, sculpted and entwined their bodies to express a surge of human emotion, from love, to despair and loneliness.

This incredibly powerful and at times overwhelming wave of emotion was fragmented by Andy Hamer’s magnificent use of light. He drew lines which entrapped, divided, challenged and comforted the dancers. Using instruments which ranged from drums to spinning tops, Glennie wove amongst both the dancers and the light, as if gently touching them with her instinctive rhythm. It was a sound that sustained, soothed and inspired their every move.

Fusional Fragments is a collaborative piece between the Marc Brew Company and Dame Evelyn Glennie, which combines movement, striking light and an unrelenting rhythm to create a stunning piece that tugs on every string of human emotion.

The human pulse that ran through the performance was carried further by the musical talents of The British Paraorchestra. Formed in 2011, eighteen musicians, made their London debut with ‘authored’ versions of Ravel’s Bolero and Greensleeves. Under the direction of Charles Hazelwood and using assistive technology created by Rolf Gehlhaar, the orchestra created their own narratives from the original melodies.

The opening of Bolero after Ravel was distinctive and loyal, but the individuality of the group demanded to be heard and personality soon infused the piece. Teasing the audience with three false endings, each member had a moment to shine and created a new Bolero, one which was cheeky, mysterious and soulful.

With Greensleeves, the orchestra decided to “take the tune for a walk” and walk it did. Beginning slow and steeped in melancholy, it skipped into an exotic dance before striding into a powerful and defiant march. Although the orchestra personalised each piece, the group remained united in rhythm; a nod no doubt to the universality of music.

There was a running vein throughout both performances of the evening; the limitless potential of the human spirit which travelled beyond the walls of the Queen Elizabeth Hall.

Published on 22nd September 2012 by marc in Uncategorized.