(i)land performs in Glasgow as part of Culture 2014

Three people find themselves abandoned on a deserted island, with only each other for support. As they explore they gradually start to discover the pieces of a vehicle – buried in the sand – that can take them off the island. They work together to build the craft, only to discover that it won’t carry all of them. 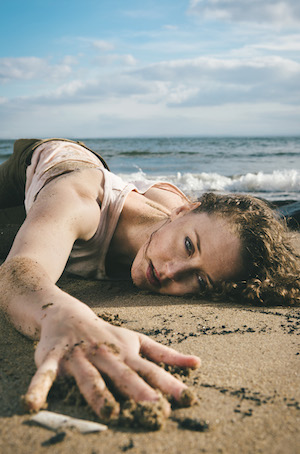 (i)land is a new outdoor dance event by the Marc Brew Company, which explores the themes of identity, belonging, survival, independence, and ownership of land and space.

Part of Festival 2014 – the massive Games Time celebration running alongside the sporting action of the Glasgow 2014 Commonwealth Games – and supported by Without Walls, this thought-provoking performance will take place as part of Merchant City Festival –

All performances will be audio described and Touch Tours will be at 11:45am and 2:45pm on each day for 1/2 hour. For further information please go to VocalEyes

Performed on a six ton pile of sand, (i)land raises questions about everything from isolation and exclusion to the perceptions of the body in dance. It’s inspired by stories such as Lost, Castaway and Lord of the Flies.

Check out the Preview by Kelly Apter  in the List and listen to the interview with Marc Brew on BBC Radio Scotland Culture Show interviewed by Ricky Ross chatting about our new outdoor work (i)land  (time code starts at 1:36)

Founded in 2008, the Marc Brew Company has been creating contemporary dance performances in the UK and internationally since 2008, collaborating with disabled and non-disabled performers and artists to reveal inspiration in everyday life.

Published on 23rd July 2014 by marc in Uncategorized.