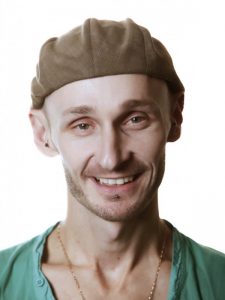 Marc Brew trained as a professional dancer at the Victorian College of the Arts Secondary School and The Australian Ballet School. He has been working in the UK and Internationally for the past 20 years as a dancer, choreographer, director, teacher and speaker; with the Australian Ballet Company, State Theatre Ballet Company of South Africa, Infinity Dance Theatre in New York and for 5 years up until early 2008 with CandoCo Dance Company. He was a guest performer, collaborator and media spokes person for the London Hand Over Ceremony for the Beijing Olympic and Paralympic Games Closing Ceremony and in 2009 was appointed Associate Director with Scottish Dance Theatre – ‘Scotland’s principal contemporary dance company’ where he co-directed ‘NQR’ and was Associate Artist at Tramway Theatre in 2015/16. Since 2001 Marc has been dedicating time to his own choreography with Marc Brew Company.

Whilst in Australia Marc was the Victorian Arts Award Winner for the Young Australian of the Year Awards 2001 and received the Fringe Performance Award for Best Original Solo Work at the 2002 Melbourne Fringe Festival. In 2003 he was a recipient of the Shine On Award from Rotary International and received a Centenary Medal of Australia for outstanding service as a dancer and choreographer. He attended DanceEast’s international Rural Retreat for future leaders in January, 2008 and subsequently through the Cultural Leadership Programme received a bursary for a placement with ‘Scotland’s principal contemporary dance company’- Scottish Dance Theatre. In 2007 Marc was featured by Time Out Magazine as the best of the new breed of London’s Rising Dance Talent. In 2014 Marc was nominated for Outstanding Achievement in Performance (Individual) at the prestigious Isadora Duncan Awards for his solo piece Remember When.  In 2015, Marc was made an ambassador for the Spinal Research Institute. His recent solo work For Now, I am… was listed in the Guardians Top 10 Dance Shows for 2016.

As a choreographer Marc seeks to challenge and be challenged. Providing the dancers with a new vocabulary that enhances their creativity, he tries to redefine expectations of physicality for both performers and audiences. His work is renowned for its tender, precise choreographic material that exemplifies the beauty of the moments shared between people, revealing the unusual and the inspiring in the everyday and the mundane.

“Marc Brew’s technically challenging work is nothing short of riveting and a clear indicator of where Brew is currently at choreographically, dance commissioners had best get their cheque books out.” ★★★★★ The Scotsman

Now based in Glasgow, Marc’s work has been toured to critical acclaim across the world, his outdoor work, (i)land was commissioned for the Glasgow 2014 Cultural programme and Without Walls.  His Unlimited Commission Fusional Fragments was part of the London 2012 Cultural Olympiad and a collaboration with world-renowned musician Dame Evelyn Glennie.  His new work For Now, I am… had its world premiere at the inaugural Dance International Glasgow Festival 2015 to outstanding 4 and 5 star reviews.  Marc has also produced work for a number of high profile companies such as Scottish Ballet, Indepen-dance 4, Ballet Cymru, Candoco Dance Company, Scottish Dance Theatre, Touch Compass (NZ), Axis Dance Company (USA), Amy Seiwert’s Imagery (USA), Velcro Dance Company, GDance, DadaFest International, Without Walls Consortium, Greenwich and Docklands International Festival, Liberty Festival at Trafalgar Square, East London Dance for The Big Chair Dance as part of Big Dance 2008, London Contemporary Dance School Graduation Dance Season, Small Dances at Stratford Circus, Resolution!, Choreodrome and Touch Wood at The Place. New choreographies for youth dance companies include; YDance Project Y, Cando2 and Shift, Bournemouth and Poole College and a new series of site specific interventions Turning the Inside Out for the InTransit Festival 2008 in the Royal Borough of Kensington and Chelsea. Marc was also choreographer for the fashion industry’s ultimate night of celebration the British Fashion Awards 2009. Theatre credits as Movement Director include; “Getting Better Slowly” Project, Graeae Theatre Company’s “The Rhinestone Rollers”, National Theatre of Scotland’s “Mary Queen Of Scot’s Got Her Head Chopped Off” and “Our Teacher’s a Troll”, Dundee Rep Theatre’s productions of “Elephant Man” and their Christmas show “Sleeping Beauty” and “The Snow Queen”.