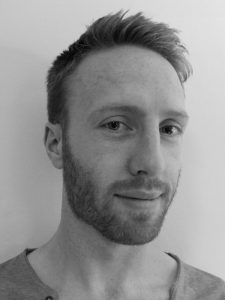 Rob Heaslip is a contemporary dance artist working in both The U.K. and Ireland. Prior to his contemporary training, Rob was a member of The National Folk Theatre of Ireland and earned a BA in Languages and Cultural Studies as well as a MA in Contemporary Performance. He later completed 3 years of professional training at The Scottish School of Contemporary Dance.
As a maker, key works created include FREAGRA | A Blurred Expanse, MEITHEAL, RÁS, 2-1-2, That Sweetest Moment. Key collaborations include Wunderbar and You and Me, and You with Laura Murphy, and dance film Strange Attractors with film-maker Marie Liden.
Throughout his career Rob has performed with Irish Modern Dance Theatre, David Hughes Dance Productions Gary Clarke, Angus Balbernie, Flesh Collective, Untitled Productions, Mary Nunan, Charles Lenihan, Cindy Cummings, Kylie Walters, and Tanja Liedtke.
This is the second time Rob has joined Marc Brew Company, having previously toured the UK as part of (i)land.