The Independent – How We Met: Marc Brew & Dame Evelyn Glennie 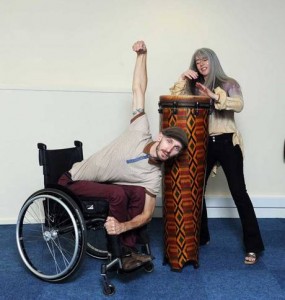 ‘I was like a sponge with him and his dancers; I wanted to soak everything up’

At 20 years old, the Australian-born ballet dancer Marc Brew was injured in a car crash, and confined to a wheelchair. He is now a choreographer and artistic director, and performs all over the world.

About a year ago, I heard about Unlimited, an initiative helping fund a series of commissions across the UK to celebrate the London 2012 Cultural Olympiad. It immediately appealed to me, and I wanted to do something that drew on my experiences that would make a real impact. That’s why I approached Evelyn.

My first hurdle, though, was how to reach somebody so high-profile? In the end, I simply called her office, put in my request and she said yes! I was extremely excited, of course, but also very nervous.

One of the many things that appealed to me about working with her was that she had made a very successful career for herself, one not based at all around her disability but rather her musical talent. That’s always been my aim as well.

So we began to work together on Fusional Fragments, a show that would bring together my choreography and her music. The idea was for us to get together as soon as possible. But because both of us travel so much for work, we were never in the same country at the same time. So instead, we had lots of meetings via Skype. I’d send her ideas, and we’d update over the phone, email and text.

I wanted to focus the show around certain words – dislocated, broken, shattered – as themes. Then she, and our composer would put it all to music and send it back to me. She’s an incredible musician, and she plays everything, not just normal instruments but household objects, glass, children’s toys…

She was very keen to have my feedback, but I did find it daunting at first to critique her. But she proved wonderfully receptive to my vision.

We eventually met when we premiered a rough cut of the show with our dancers in front of an audience. It was fantastic to finally meet Evelyn in the flesh, and it was so exciting to see what we had created hang together so well.

The whole aim of this project was to show that disabled artists can create work at a world-class level. I wanted it to be powerful, dynamic and engaging, and also big. I have to say it’s turned out bigger than I could ever have hoped for.

Born and raised in Aberdeenshire, Glennie became profoundly deaf at the age of 12, but went on to become one of the world’s most successful virtuoso percussionists. She recently performed at the 2012 Olympics opening ceremony.

I’m always very open to all sorts of ideas, so when Marc got in touch, I immediately started exploring his work. I was thoroughly enthralled by what I found, and quickly realised that this would make for a fascinating collaboration. One thing led to another, we chatted – on Skype – and began to take it forward.

In my work, I want to engage in something that has a high emotional content as well as obvious quality, and what Marc was suggesting clearly had both. He is inspirational. When you think what he has gone through, just a huge, daunting question mark, and you have no idea what the future holds… Well, it’s very often at times like this that you produce your most incredible work; you haul things out of your system you didn’t even know were there. And Marc did.

He may be physically confined to a wheelchair, but he is such an independent spirit, and has such freedom, and also authority, you can’t help but be influenced and inspired by him. It’s all the power of the mind, isn’t it? I have huge admiration for him.

When I attended the rough-cut performance, the depth of the emotion really got to me, and I was very happy with what we had come up with together.

Of course it was nice to finally meet Marc face-to-face, though I felt as if I’d known him for years already. That’s the power of the internet, I suppose. By this time, the work was already established, so there was no friction between us, no fallouts at all. In fact, I was like a sponge when I was with him and his incredible dancers; I simply wanted to soak everything up around me in order to learn how I could become a part of it myself rather than a square peg.

The performance has a wonderful simplicity to it. It’s only 35 to 40 minutes long, so I think there is a lot of scope for us to develop it into another, longer show altogether. I really think it deserves to be seen, because I believe it could inspire all sorts of people. Its message is that it shows there are no boundaries to any of our personal journeys, none.

Published on 25th September 2012 by marc in Uncategorized.