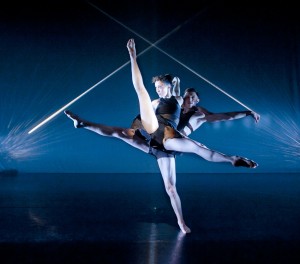 In fact, Marc Brew’s juxtaposition of classical and contemporary movement styles is vital and compelling, a gorgeous weave of attractive physicality, thrillingly percussive soundscapes and a lighting design where fine golden rays spike through shadows to kiss the limbs that fleetingly cross their path. Exquisite.

This mood – primal, mystical, timeless – is generated from the moment Evelyn Glennie crouches over a drum in the semi-darkness and sends wonderfully insistent rhythms into the void. Her summons is answered: a male dancer emerges and, not unlike a tribal parley, the exchange of steps and balances begins. Glennie’s own, intense body language soon adds in another dimension, especially when she moves among the dancers playing instruments that chime and shimmer against her pre-recorded score.

That she’s truly immersed in the process is emphasised by her being costumed, like the five exhilarating performers, in sheeny brown fragments – think Vivienne Westwood for Peter Pan, and you’ll appreciate her gumption, as well as her percussive panache in this very welcome Unlimited commission.

Before the interval, Brew’s solo Remember When touched eloquently on aspects of his mobility before, and after, he became a wheelchair user. It’s honest, unsentimental and expressive beyond words. The triple bill opened with Nocturne, a wry – often athletic, sometimes sensual – foray for two couples who may, or may not, be partners beyond this bedroom encounter … What is not in doubt, however, is Brew’s choreographic flair in this, his company’s first showing.

Published on 30th October 2012 by marc in Uncategorized.