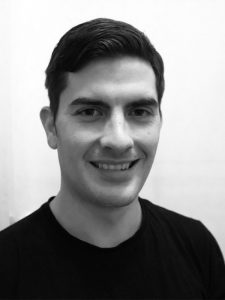 Visual Projections – For Now, I am…

Jamie Wardrop’s arts practice encompasses music, theatre, film and digital animation. He trained as an actor at the Royal Conservatoire of Scotland. He work primarily using the techniques of a VJ or live video artist in diverse settings.

His VJ work includes the critically acclaimed design for Beats by Kieran Hurley. Beats won Best New Play at the Critics Award for Theatre in Scotland in 2012 and Jamie went on to tour with the production to major UK venues in 2013. In 2014 he created outdoor video and sound installations for Electric Glen in Rouken Glen Park, Glasgow. As a composer and video designer he was part of Macbheatha – a Gaelic translation of Shakespeare’s classic as part of Made In Scotland’s programme at the fringe. He is a resident VJ for Soma Record’s Pressure at the Arches, Glasgow where he VJs for some of the biggest names in techno. He was commissioned to create a live visual set for Glasgow band errors at The Arches Referendum Party utilising source material from the Scottish Screen Archive.